Thanks again for everyone who bought a double weekend charity pack the weekend before last. We raised $320, which has been donated to the British Red Cross' Typhoon Haiyan Appeal.

I started a poll last weekend which a lot of you gave your feedback. Thanks for that. Every time there is a poll, I hope you all give as much feedback as possible, as I do read each and every one. There were a few things that either have been misinterpreted or misunderstood, so I have reached out to a few people's feedback I felt needed to be addressed.  There was some very constructive feedback. Thanks again for taking part. It can only make RoB even better than it already is.

Love it or hate it, the war system has been a continued debate for quite some time now. I've thought up a new system, which i think will be a bit of fun, and put some enthusiasm back into wars. Click here to view the thread and to give your feedback. We're making some good progress, I think.

One of the downfalls of having a popular online game or website, is that it tends to become the target for spam. Recently we've had a few people attempt to spam blood letters and comments. I've built up a quick system to deal with spam. When a spam post is reported, ACT & I have a quick one button system that removes all their sent blood letters and jails them automatically.

I have now extended this to comments. So comments now come with a report spam link which acts the same as the blood letter link. If you ever get a spam post, please report it so we can clean it up as quickly as possible, thank you.

Some people preferred the old Google Checkout payment method because they accepted pre-paid gift cards. Paypal yesterday announced that they are now accepting pre-paid cards too! (I'm positive Realex does, but now it's even better Paypal do now as well.) It took them long enough, but at least they accept them now.

Thermoden was launched over a year ago now. Its success is far greater than I anticipated. It took a hell of a lot of money out the game, and at the same time, gave people great equipment boosts.

Today I am happy to announce a few updates to Thermoden:

Ohhh the underground. One of Reign Of Blood's first features, but not one of the most loved. The underground has been a place of turn sucking adventure for years, and all to complete that pesky achievement.

Well good news! Firstly, the underground has gone under a bit of a facelift. It now looks a lot better than it did before.

Secondly, for all those that have completed the 2000 step underground achievement, you can enter: The Underground Level 2.

What's so great about level 2?

It's free to walk around level 2. FREE. You can walk around the 300x300 level 2 and it won't cost you any turns. If you choose to explore a certain area, that will cost you a turn. You'll be able to find all sorts down there, and more stuff will be added over time. 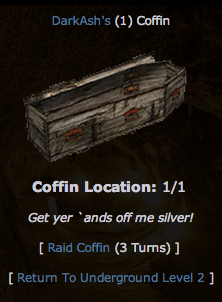 Claim a section of level 2 for yourself. You can pay a fee to own a certain location of the level 2 underground (for example: 100x99). Here you can have a coffin. It doesn't have to be your main home, but it's a part of the underground you can call your own. Other vampires walking around the underground level 2 can come across your home, and take a look whilst passing by.

Coffins are used to store some things that are only found on level 2. Things that are not safe for you to carry around for too long.

Don't think because you've bought a piece of real estate below the underground that's the end of the story, oh no. Other vampires can raid your coffins and steal some of the contents you are storing in there. It costs 3 turns per raid, and gives the itchy vampires who love a bit of theft to be a bit naughty.

Can't have any underground updates without throwing in some new quests.


This all gives a great future for the underground, as well as plenty of opportunity for further expansion. As you could probably figure out, there's some stuff left open here. Head over to the underground to check it out.

So far the Underground 2 looks to be stuck on 0,0 in the tab when exploring it and nothing else has opened up for it yet. I can't wait for it to open fully

Underground Lvl 2 is Great..I simply love it, I still need to find one key then I finished all the new Quests..Lol..This is all really great stuff..Lol..Let me get back to my coffin and guard my silver before the sun rises..hahaha Thanks Ash..

Nice updates. I hope the coffins of deleted vampires are deleted also (or you should be rank 20 to buy a coffin) or the Underground will be full very quickly :)

There's also a typo in the Thermoden rename shop: SHEILD

Always love stuff that I can add a pic to :P Enjoying lvl 2 :)