A big thanks to everyone who bought a special double weekend pack. I decided that $5 of each pack would be donated to the British Red Cross' Typhoon Haiyan Appeal. Even though the pack was a last minute thing, my target was 50 packs sold. 64 of you decided to get a pack in the short time frame the pack was open for the double weekend goodies. That's $320 (£200) that has just been donated. 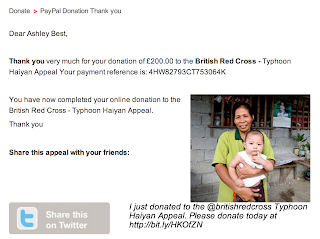 Thanks to everyone who contributed to allow me to be able to do this. As I said before, I know we have some players who live over there, my thoughts are with anyone effected.

I always appreciate that you run specials Ash to assist those whom have had their bums kicked by Mother Nature! Thanks again for always making specials that bring relief to those who need it so badly! :)

Well done everyone and especially ash for coming up with this idea.

nice 2 c there r some people who care well done

An awesome thing for you to do.... what a fantastic cause... WickedInsanity at certifiablywicked@gmail.com

This was an excellent idea :-)