Changes To The Game Store (Part 1)


I hope you enjoyed the week of free boosts after the AP rage event!

It has been a long, long, long time since I've updated or touched the game store, including VIP and Plasma. So recently, I've been given it a lot of thought and how we can improve the system for everyone. This is quite a big update and a lot to take in, so it's broken down a few parts. This is part 1.

Firstly, I've gone through and streamlined and updated all the game store pages. All the back buttons work as they should, and there has been some general housekeeping over there. You'll notice the biggest change on the page you choose the payment method (image below). 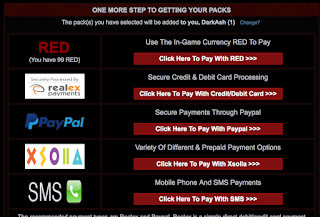 Introducing RED. One of the main hurdlers I've seen is the ability to freely and easily trade to get the packs you want. At the moment we can trade the currency of plasma, VIP credits and packs themselves. But, paying for them is tricky because everyone wants different things in return. I saw a demand for a new universal currency, which can also be used to buy any special or surprise packs too.

Each pack on the Reign Of Blood store now has a set RED price too. For example, the 30 day VIP pack ($5) has a price off 500 RED. Having RED worth small amounts makes them easy to buy, trade, earn and give away.

How Does RED Work?

When you add the packs from the game store you want to your basket, and then click go to checkout, as you'll see in the screenshot above, an option to pay with RED will appear. This works exactly the same as paying with real money.

RED can be bought from the game store, located below the VIP and Plasma packs. The price of RED will always stay the same, as we don't want a fluctuating currency on both ends. There are ways to earn and win RED too, stay tuned.

RED is totally flexible. You can use it to buy any of our game store packs (for you or someone else), use it to reduce the cost of the packs, you can sell it on the market, you can give some to other players, and you can also donate it to your coven. Coven owners can give it out their players as freely as they like. You can also sell them on the auction market for in game cash or AP, and there's also a spot on the wants market too.

There are some ways you can earn RED in game too! They will also be special events that pay out some RED. I'll dive deeper into that in part 2 of this update in the coming weeks.

With the introduction of RED this means that I will be retiring Points. Points will no longer be rewarded for the offers and surveys, they will now pay out RED. This also applies to mCredits (which is what is used to purchase packs via mobile via Xsolla), and also VIP Credits. For the few of you who still have VIP Credits, you can still go to the VIP Credit page (link on its FAQ) to trade them for VIP. The same goes for Points. That option won't go away. RED is displayed on the left sidebar, which you should see now.

The points page will be taken down today and tomorrow while I do the transfer of currency.

To help simplify Vials, there are now only 4 vial colours.  Plasma packs give multiples of blue Vial to easily show you get more in higher packs. If you owed any of the colours that were removed, I have given you that same quantity in blue vials so you're not being shortchanged.


This has been a lot to take in, I know. And there's still more to come!  I have also made a forum post that goes into a little more detail if you have any concerns or are interested. You can click here to read that forum post.