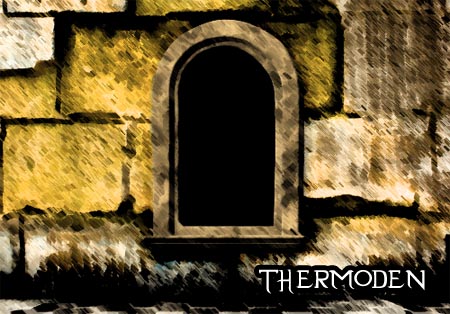 Thermoden Summary
I introduced Thermoden back in March, (doesn't time fly?) and to my surprise, it's reason for creation has far succeeded my predictions.  Thermoden was created to give, at a nice cost, weapon upgrades, the ability to equip and second weapon, and equipment renaming. To date, to my amazement, Thermoden has taken $11,450,000,000 out of the game economy (To compare, that's around 1/4 of the total money in game at the moment!!)  Which is indeed still impressive as I've seen games in their trillions. So to expand this success, here are some new updates based on your suggestions...

Shield
I'm sure you've noticed that empty unused slot on the equipment page? Well, that slot will is available for shield equipping.

Shield Warehouse
Parch has been working hard behind the scenes in order to get a bunch of shields made at the warehouse, and thats where he puts them on sale. The shield warehouse shop is now open at Thermoden. Parch, a resident of Thermoden, is currently the only vampire with the skills to make such equipment. There will not be a shield shop opening at Dead City.

Parch has no use of the shields after you buy them, but you can sell them to the Dead City reseller store for half their value.

The defence tests on your homepage will now also take your shield defence into account, and finally, shields have the same exp and level up system as the weapons and armour.


Parch's Unlock Store
The unlock store now has the option for you to pay to unlock the use of a shield.

Parch's Shield Enhancement
You've learned the ability to use a shield, you've bought a shiny new shield, and you want to give it a one time upgrade? Well you can at the shield enhancement store.

Parch's Rename Store
You can also rename your shield, just like with your weapon and armour.

Covens & Battles
Don't panic! Shields can be donated to covens. I've opened up a nice little slot for them in your coven's armoury. The top of the battle pages also now shows your shield if you have one (instead of your second weapon).

I hope you enjoy the Thermoden updates, and enjoy finding out whether 2 defence equipment works out better for you over dual weapons. For those that can afford such luxuries, will you be using a shield, or second weapon? Fire off your comments and thoughts on this thread.

December Competition
As it's the month of December, this months competition ought to be Christmas themed, right? Excellent! The task this month is to write a Christmas song/rap about the Dead City. Can be anything you like! Entries must be in by the 20th December, and the winner will have their song posted on the blog and win 20 plasma! Click here for more information.

Have a good week,
Ash

Nice to see more for Thermoden.

Lmao, oh. It'll be interesting to see what songs are thought up and what the winner has created. Definitely looking forward to this!

It sounds like an interesting idea but I dont like the part where you can only equip a shield or a second weapon and not both.

Nice upgrade but. Seriously if it replaces the dual wield. Wouldn't it make more sense for those who have already bought 2nd weapon to just buy a shield and replace their 2nd Weapon? Instead of making people dish out 15 mil again?

a couple shields should also be added to the purchace page. id reather part with a little rl cash than battle for another 60 mill.