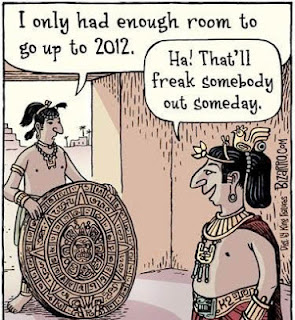 Well who would have guessed that the world wasn't going to end on Friday? I'm kind of lost on what to do now, as I was expecting to perish [/sarcasm] I hope you all enjoyed the day event, activity was sky high! The free collectible and 2 QP has given to all vampires that survived the day.


Merry Christmas
This will be the final blog before Christmas, so I wish you all a merry christmas. I have given everyone 3 free candy canes.


December Competition
Some good entries for the Dead City Christmas song/rap. I've posted my favourites below, hope you enjoy them! (I've given out the prizes and candy canes to other ones I liked but didn't post)

To all my little homies, down in the snow
Let string up some kittens, around dead city, yo.
I`m a badass vamp, with a whole lot a zest
Santa`s coming to town bitches, who would have guessed?

Whether you`re naughty or nice, everyone`s gonna be screwed,
The apocalypse is coming, wait, who is this dude?
He`s got a snow white robe, and he`s madder than hell,
"to hell with you all, your soul`s I will sell"

Now Santa was pissed, he was decking the halls,
"To hell with you Jesus, I`ll have your balls."
He cursed and he swore, and he kicked some son-of-god ass,
Mrs. Clause would be sad, she`d just been invited to mass.

So he adorned his foot upon his face
Santa was screaming, "how`s this taste?"
He begged and he cried, while all the kids cheered,
"To hell with the end of the world, Armageddon out here."

He ran and he fell, on his way back to dad,
Giving the world a new religion, maybe even a fad.
"Go home and cry", said Santa with glee,
I`ve had a lot to drink, and now I must pee.

He went to the urinal, to give it some juice,
when he thought to himself, "where was that noose?"
Sad and depressed, he drank and he drank,
until it was closing time, then his hopes sank.

He stumbled outside, and threw up in a bush,
he brought out his pipe, with a little purple kush.
Smoking and toking, as he laughed and he coughed,
he looked at his waist line, and suddenly went soft.

I`m a fat piece of crap, boy am I`m out of shape,
maybe next year I`ll dawn a new guise, a cowl and a cape.
Snuffing his joint, and getting his sack,
mrs. clause was complaining, he said "get off my back"

Hopping in his sleigh, and calling the reindeer by name,
he whipped them all soundly, as they stared down in shame.
Loopy on doopy, on tiny on Jim,
on bitey, on Janice, on Phyllis Diller and Kim.

He swerved and he hiccupped, as he flew out of sight,
Merry Christmas y`all, I got f***ed up tonight.


`Stalking in a Vampire Wonderland`

Sleigh those things, are you listening,
Underground, gems are glistening
A terrible sight,
No juicy humans tonight,
Stalking in a vampire wonderland.

Gone away are the wise ones,
Here to stay are the covens
We declare a little war,
Win cause our power is more,
Stalking in a vampire wonderland.

In Spring Valley we can kidnap humans,
Then have them all for tasty midnight snacks
They`ll say: Are you insane?
We`ll say: No man,
But we`d love to suck you dry
When you fall down.

Later on, we`ll aspire,
To gain the rank, of top vampire
The blood`s never enough,
Being human is tough,
Walking in a vampire wonderland.

In Vadenhill we can harvest humans,
And dine on blood we`ve brought from other towns.
We`ll have lots of fun slaughtering humans,
Until the hunters try to knock us down.

Mortal blows, ain`t it thrilling,
Ripping out spines; now thats chilling
We`ll frolic and play, with blood on our face,
Stalking in a vampire wonderland.

Cutting off each head, taking out a jugular.
Oh no she beat me at the kill after all.
I revive, I revive, I got VIP.
I just need to Heal Maaagically!
Jingle kill Jingle Kill I will win next one.
I will use my 10 minute power and my Sword of Avalon.
Jingle kill jingle kill I will rip off your head.
When it is done I will be a level 10!


Have a good week & a great Christmas :)
Ash

Mine was more traditional, but I really like the winner; props for that. I look forward to future competitions like this, it was fun :D

Thanks for the holidays and I knew we would survive ;-D

Thanks for the candy and thank God we survived